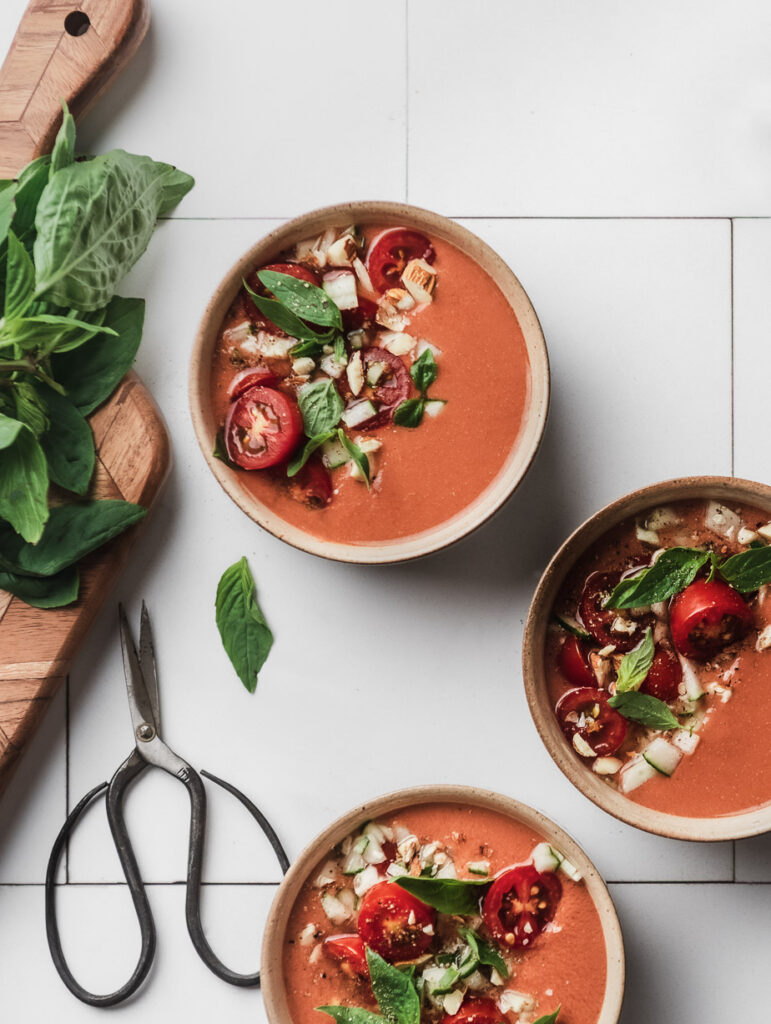 First, what is gazpacho?

Gazpacho is a soup made from raw vegetables usually with fresh tomatoes as its base.

There are so many ways to make gazpacho as you can use many fresh veggies and add almost any flavour – as you’ll see in the recipe below. Different cultures and regions have their own signature versions, calling upon local ingredients and traditional preparation methods.

I call this a simple Gazpacho because the ingredient list is short and the procedure is straight forward – everything is added to a blender or food processor – but there are suggestions on how other fruits and veggies, herbs, and even nuts can jazz it up.

Up until like a week ago I would say I was indifferent to gazpacho (also called gaspacho). Cold soup never spoke to me.

But now that I live in a city with a my-body-feels-like-it’s-on-fire kind of summer, I find myself craving gazpacho’s vibrant, fresh flavours and light texture.

This simple gazpacho is hydrating and refreshing!

I’m really leaning into what’s seasonal which often leads me to recipes I wouldn’t normally try! 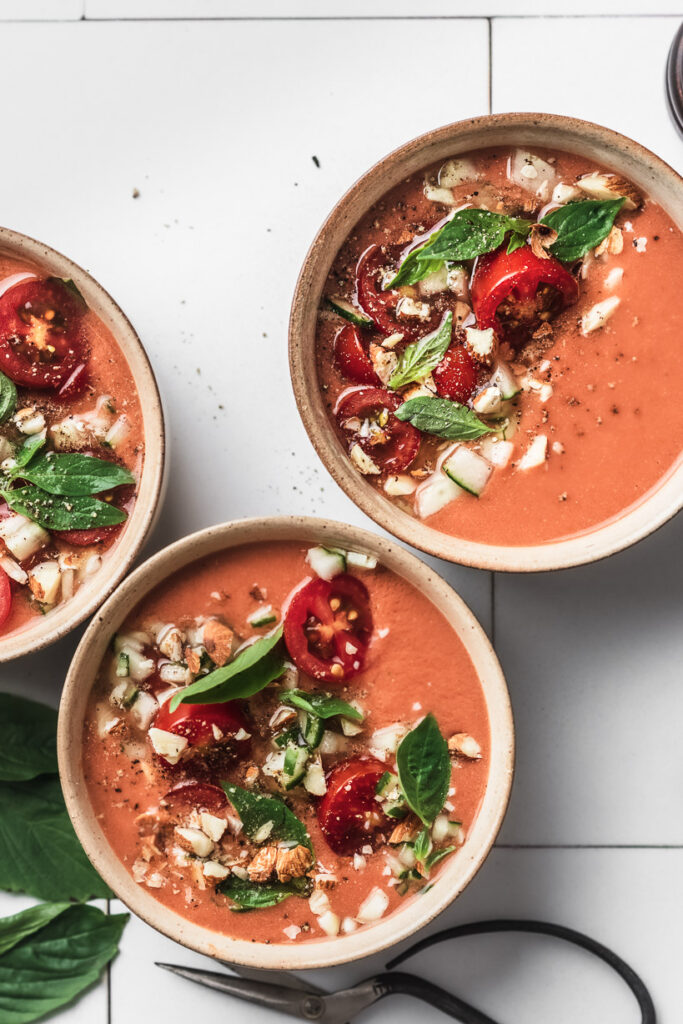 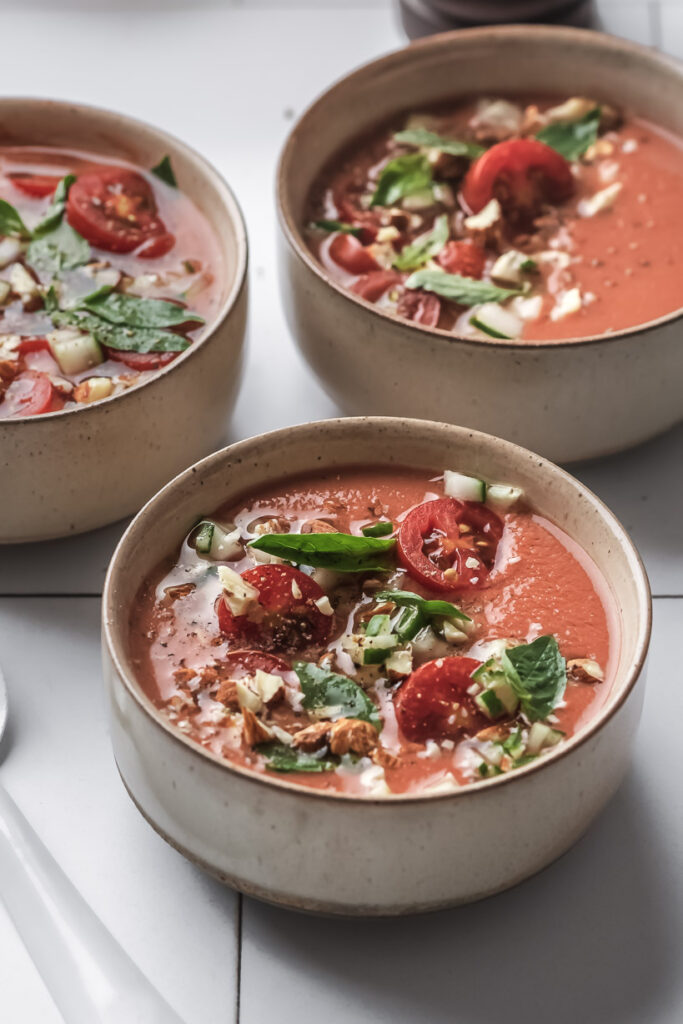 You can make this gazpacho your own depending on where you live and what’s in season but I’ve kept the ingredients quite simple here (i.e. simple gazpacho) and they should be readily available.

How To Make This Simple Gazpacho

Everything goes into a blender or food processor and is blended or processed to your desired texture.

I prefer a smooth gazpacho, so I use a blender and then pass the gazpacho through a sieve. I use a sieve like this.

If you like a more textured gazpacho, you can use a food processor and skip the sieve. 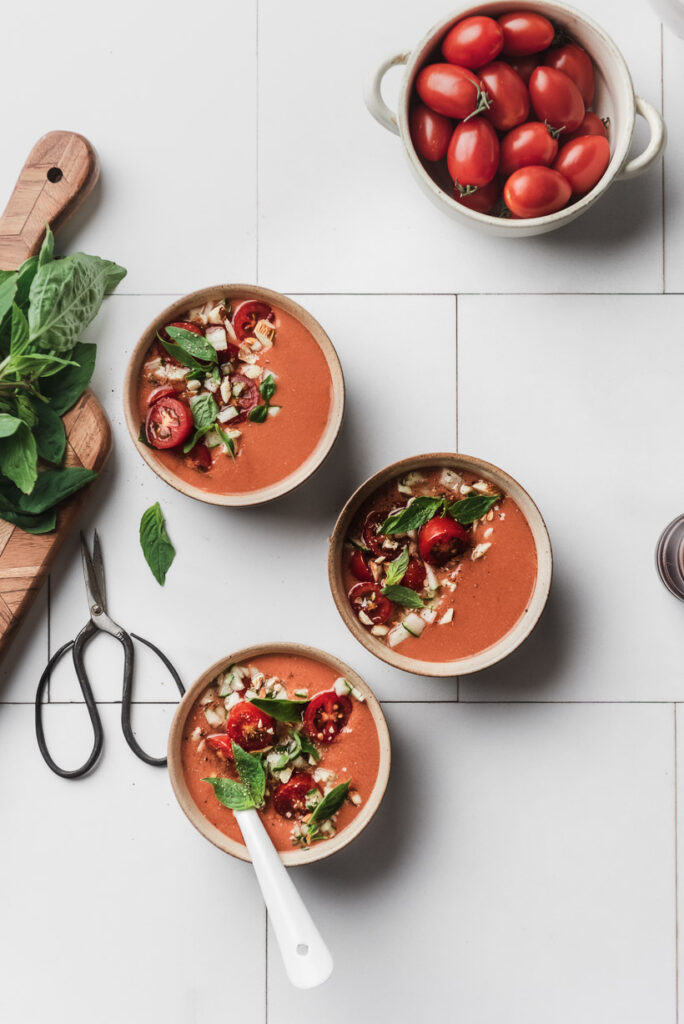 Here’s where this simple gazpacho gets exciting!

You can add all kinds of additional ingredients like…

….to create new flavours and textures.

A note! Extra virgin olive oil is often used to give gazpacho a creamy texture and appealing mouthfeel. It’s a very classic gazpacho additive. But this simple gazpacho is oil-free.

You don’t need the oil but if you want a creamy consistency, I suggest blending soaked and drained almonds or cashews into your gazpacho to create a similar effect.

To give gazpacho more flavour and interest I also like to add fresh basil. mint, or cilantro.

You’ll find even more variations for this simple gazpacho below in the recipe but ultimately the suggestions are just meant to inspire you to think a little outside the box and get creative in your kitchen!

And don’t forget that you can add interest and some of that “WOW” factor by garnishing your gazpacho with all kinds of goodies! 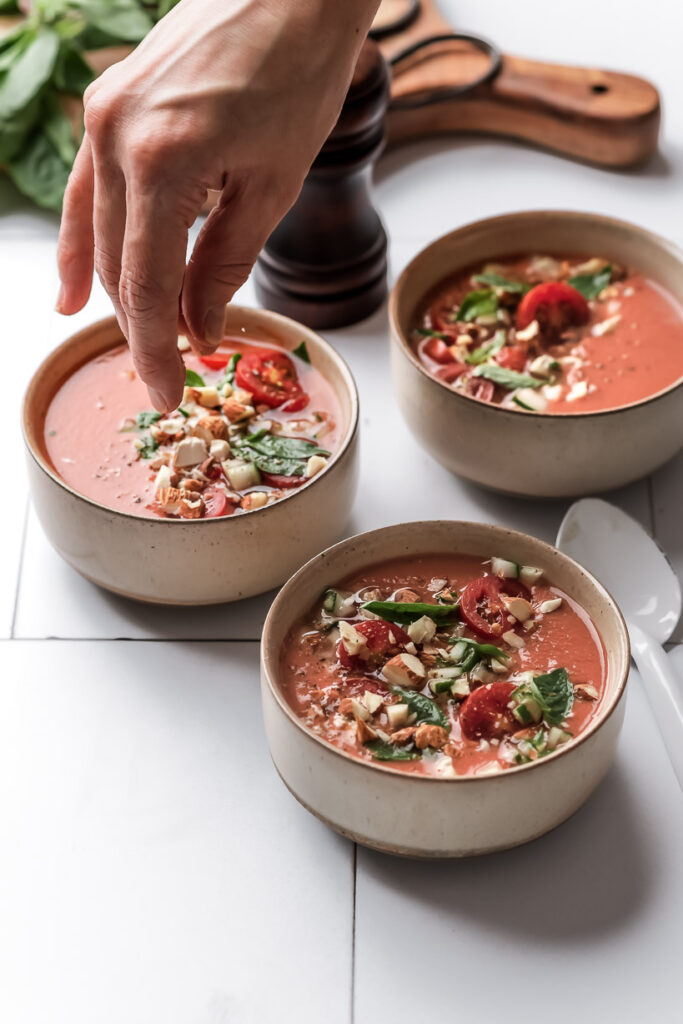 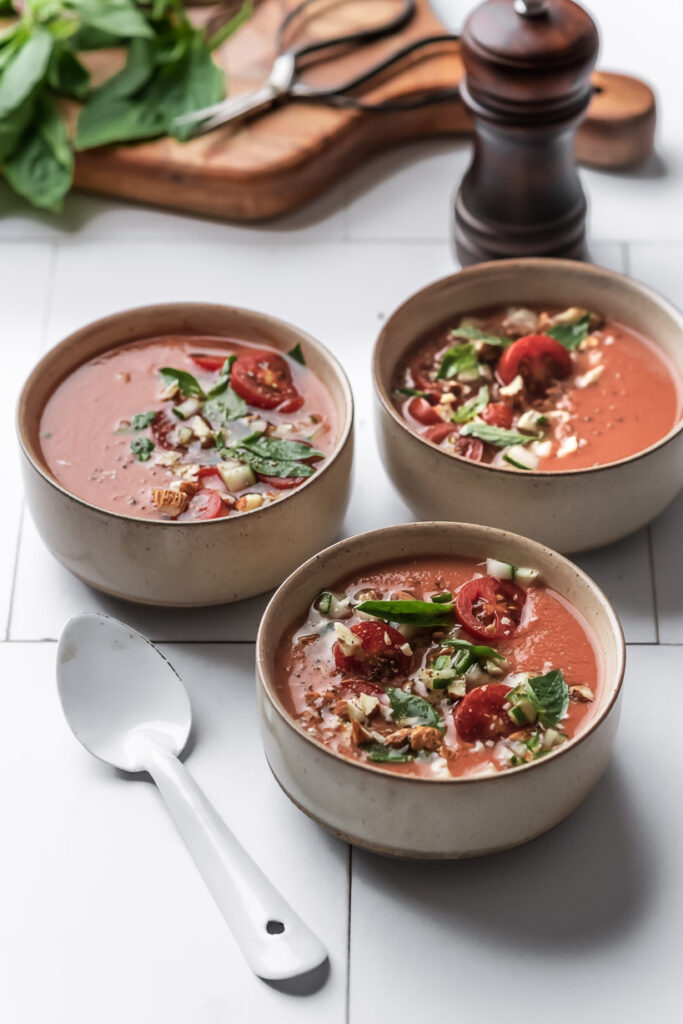 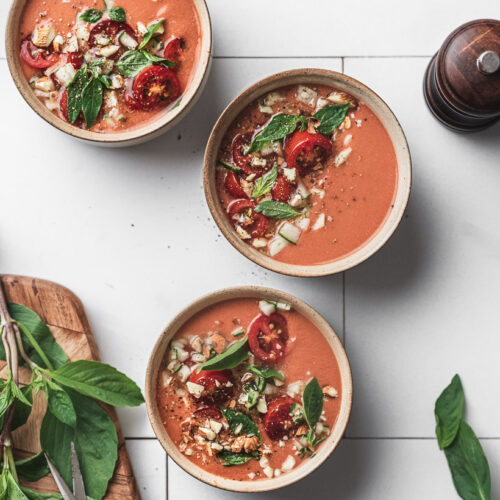 Author : Ashley Madden
Prep Time: 15 mins
Servings: 4
Course: Soup
Print Recipe Pin Recipe
This is an oil-free version of a classic summer-y soup made from fresh vegetables! Gazpacho is usually served in smaller portions in glasses or small bowls and slightly chilled. This recipe can serve 4 to 6.

Notes:
Did you make this recipe? Tag @riseshinecook on Instagram or hashtag it #riseshinecook

What to do with the almond pulp?!!! That’s the q

Stuffed acorn squash! This recipe is in the Fall i

This is a plant-based Thai curry split red lentil