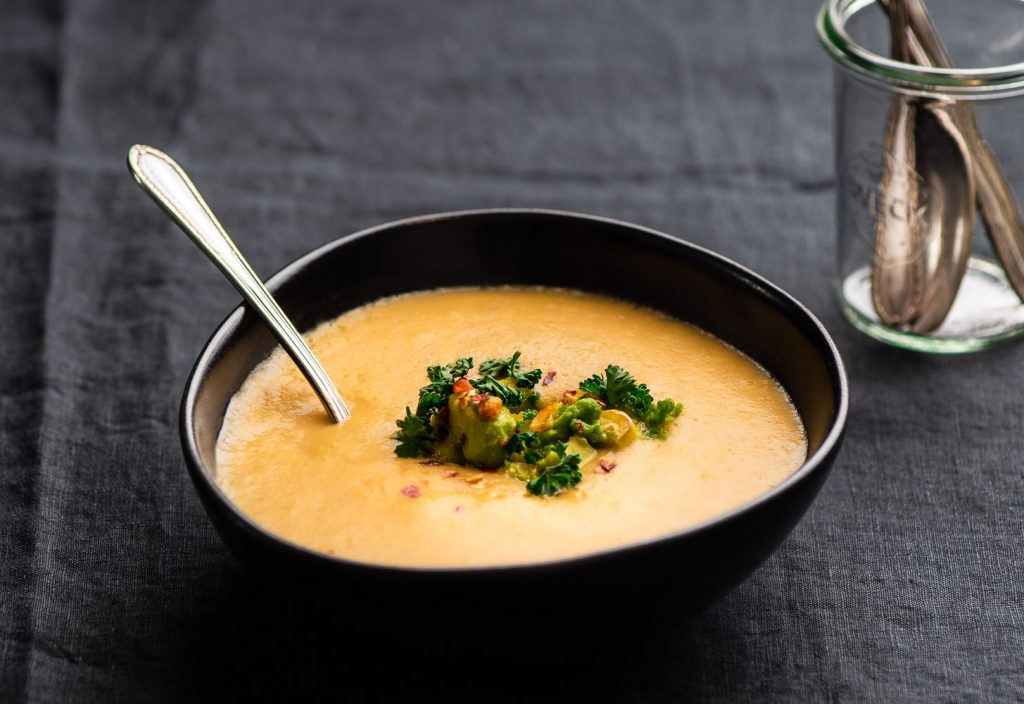 This roasted corn chowder brought to you by my unorganized freezer!

Lots of people think I’m really organized and neat.  That couldn’t be any further from the truth. My kitchen looks like a culinary bomb went off every single day.

I chop veggies and drop them all over the floor, I’m careless with my whisks and spatulas, dripping bits and drips all over the counter. I shove stuff in the fridge without paying attention to where I lay it. I put stuff in ziplock baggies without labeling them, I take bites out of cookies and decide I don’t want the rest so I just lay it in the fridge. I’m a wee bit of a disaster.

My stand up freezer is no different. There are so many frozen leftovers I’ve forgotten about, so time to clean ‘er out!

In digging out my freezer I found a few salvageable ingredients that needed to be used asap. Freezer burn was about to set in. One such discovery was a giant bag of organic corn kernels. Vegan corn chowder was on the brain.

Corn gets a bad rap because of some very unhealthy corn by-products; think high fructose corn syrup (HFCS) , corn oil, and corn starch. These corn spin offs are high in refined sugar, fat and starch making them not so healthy.

HFCS is being blamed for a lot of the health issues the modern day diet seems to cause. It’s used to sweeten a lot of processed and packaged foods and beverages. In general steer clear of this crap! 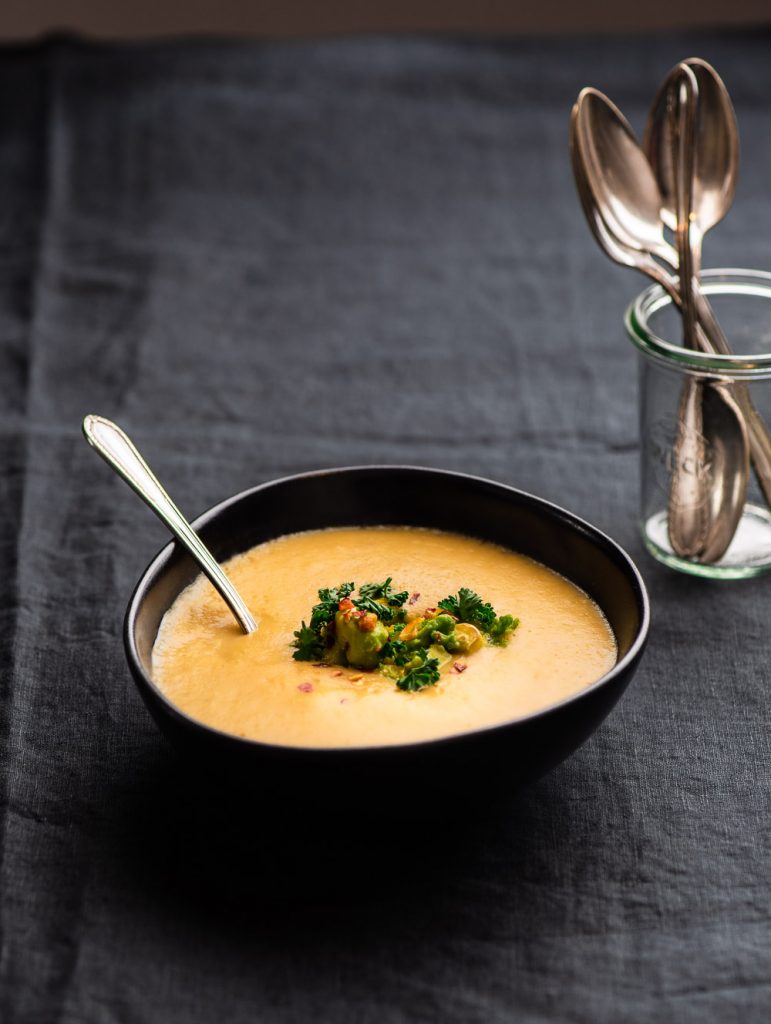 But corn ain't bad! It's good – this roasted corn chowder tells you so!

But corn ain’t all bad, there’s actually lots of good! Here are some corn highlights:

Corn is a source of insoluble and soluble fibre, but is higher in the former, making it beneficial and supportive for the microbiome, the beneficial bacteria in your gut. One cup of corn has about 3 grams of fibre.

Corn is not nutrient deficient. A few weekends ago while I was chomping down on some fresh corn on the cob, someone asked “isn’t corn just a waste of calories?” Not true! Corn is a source of antioxidants, in particular zeaxanthin and lutein, two phytonutrients that are good for eye health. Corn is also a source of minerals, like magnesium and potassium, and vitamins like vitamins B and C.

Most sweet corn, the kind found on the cob and in supermarkets is not genetically modified. However, there are some genetically modified varieties that have been developed over the last few years. When in doubt, buy organic but don’t worry too much about this.

Fresh corn or frozen kernels can be used in so many ways. It’s one of those foods you can just toss in anything! I’ve put corn in salads, soups, salsas, guacamoles (is this the plural of guacamole?) , stir-fry, bean dishes, pastas and on pizzas! It adds a nice hint of sweetness and an eye-catching pop of color.

So what did I do with all this corn? I made a gluten free, vegan and oil free roasted corn chowder and topped it with a simple smokey corn and cherry tomato guacamole.

To roast the corn I lined 2 large baking sheets with parchment paper, spread out the corn and broiled the kernels on high until they were nice and browned, not burnt! Be careful with the broiler, anything under there for even 10 seconds too long is enough to ruin your dish. 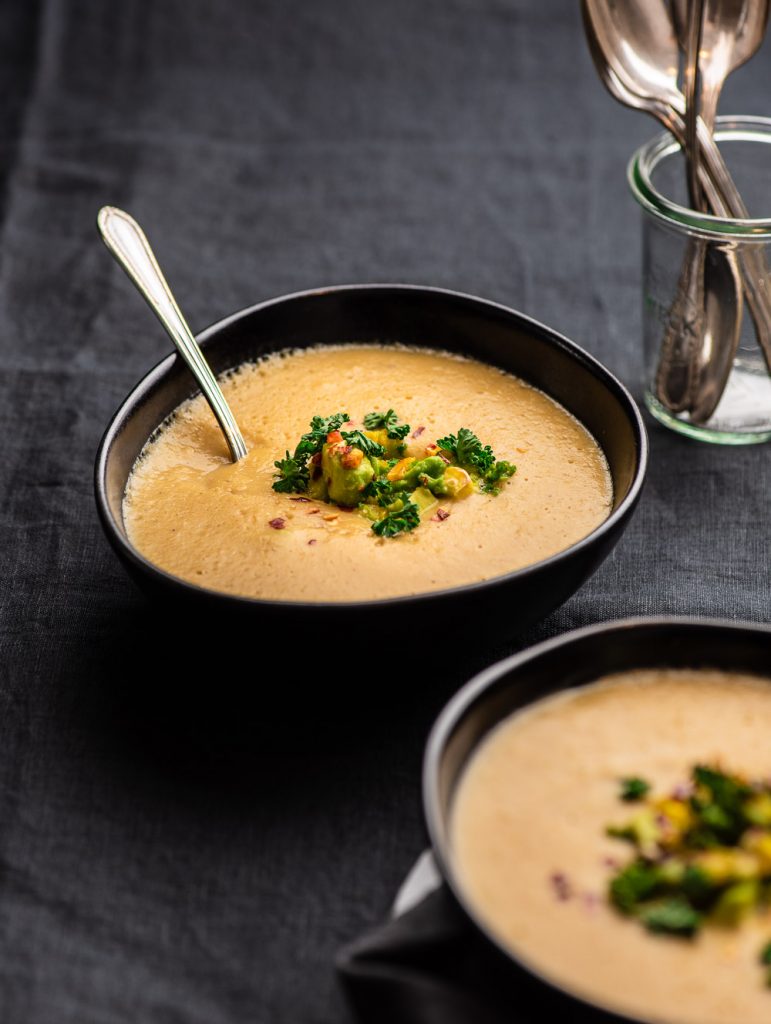 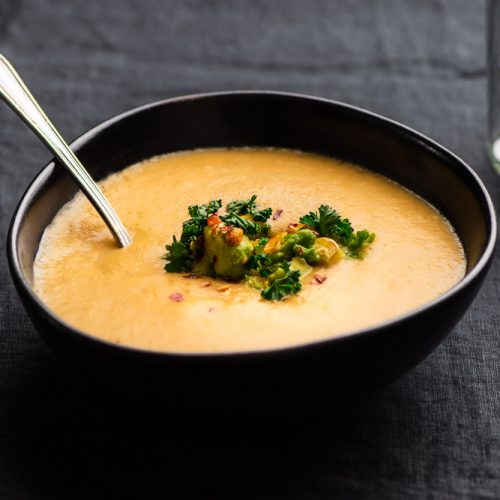