Beans are often considered ho-hum, boring, bland, blahhhh. I noticed that a few weeks ago, when people were clearing grocery store shelves and emptying coolers, that there was palpable fear we would have to resort to “rice and beans”.

I guess rice and beans are, for some people, symbolic of scarcity – an indication that we’ve fallen on tough times or that we’re no longer living in food abundance (i.e. fully stocked grocery stores).

I realized that I see a bag of beans much differently. I see a nutritious dried good packed with culinary potential. I felt a quiet sadness for people who feared beans.

One early, rainy morning, when the anxiety of food shortages had just gone viral, I opened up my inbox to find not one but two emails from different recipe websites encouraging us, their readers, to cook with beans (since meat wasn’t as easily available). The tone was persuasive like “…c’mon guys, just try beans! Let’s make the best of a bad situation…”

I wanted to “reply all” and shout my love for beans from the proverbial rooftops (or, you know, just type feverishly from behind my laptop).

I wanted to preach that beans aren’t second place, they aren’t the consolation prize! They’re incredible and underrated! They belong in our pantries and deserve a place on our dinner plates and they’re destined for much more than just hummus.

Love to hummus all the same!

And then the final call to action came when a recipe for baked beans from the New York Times popped up in my notifications that very same day.

Mind you this dish was baked with oil and cheese but I figured I’d jump on the bean-recipe bandwagon (really I’m a permanent passenger) and take the opportunity to praise the bean and encourage everyone to make beans the main course with this easy plant-based recipe. 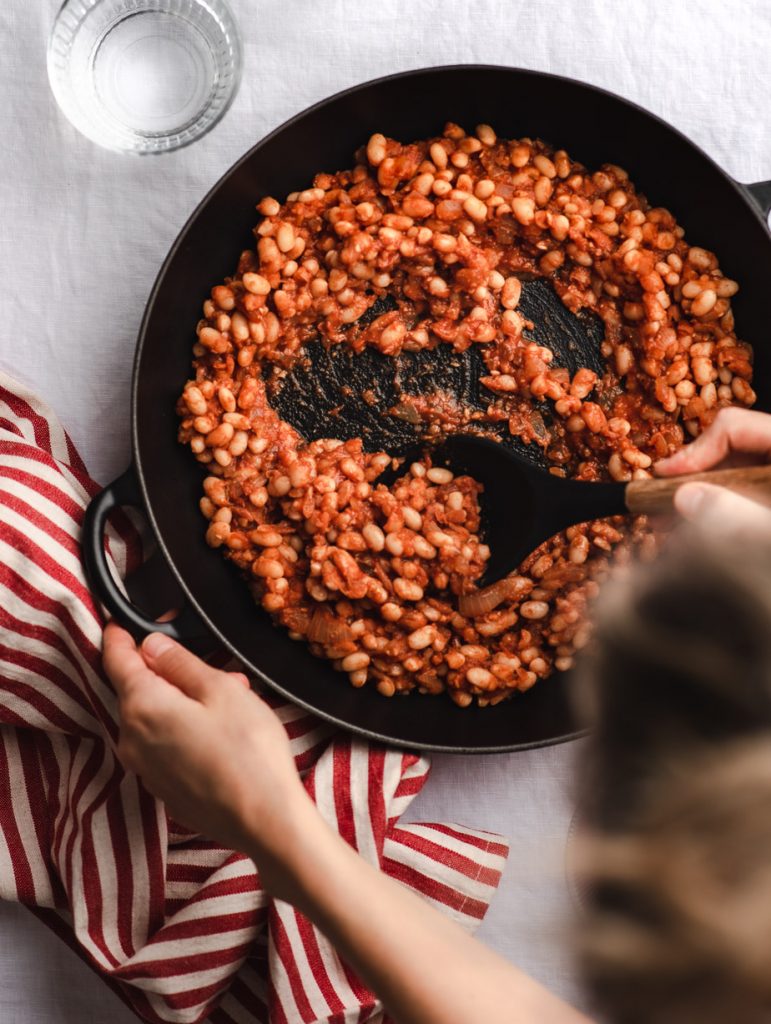 This version of stovetop beans is not coming from a place of lack, quite the opposite! It’s a simple, affordable, easy recipe shared in celebration of the mighty legume.

Beans and peas offer limitless opportunities for creativity and flavour combinations. They’re filling and cozy and can be used in so many different ways from breakfast to dessert.

Beans are nutrient-dense and health supportive offering fibre and loads of plant-based protein. I love this short but succinct article written by Dr. McMacken for Forks Over Knives.

Yes, beans are cheap. And that only makes them even more wonderful!

This recipe costs about $1.25 per serving (made with dried navy beans and commercial low-sodium vegetable broth).

Add brown rice and some steamed veggies and it’s anywhere from $2 to $3 (depending on food availability where you live).

If beans aren’t in your regular weekly rotation, try this easy vegan stovetop beans recipe. You only need a handful of ingredients and about 20 minutes.

These beans can be enjoyed as is or paired with warm grains, steamed kale and diced avocado. It’s what I consider a wholesome, heart-warming, even luxurious meal. You could also serve the beans on toast or stuff them into a warm baked potato. See my pic at the end of this post for how I turned these beans into the base of well-balanced bowl!

What a great time to enjoy and experiment with the humble and wholesome bean! 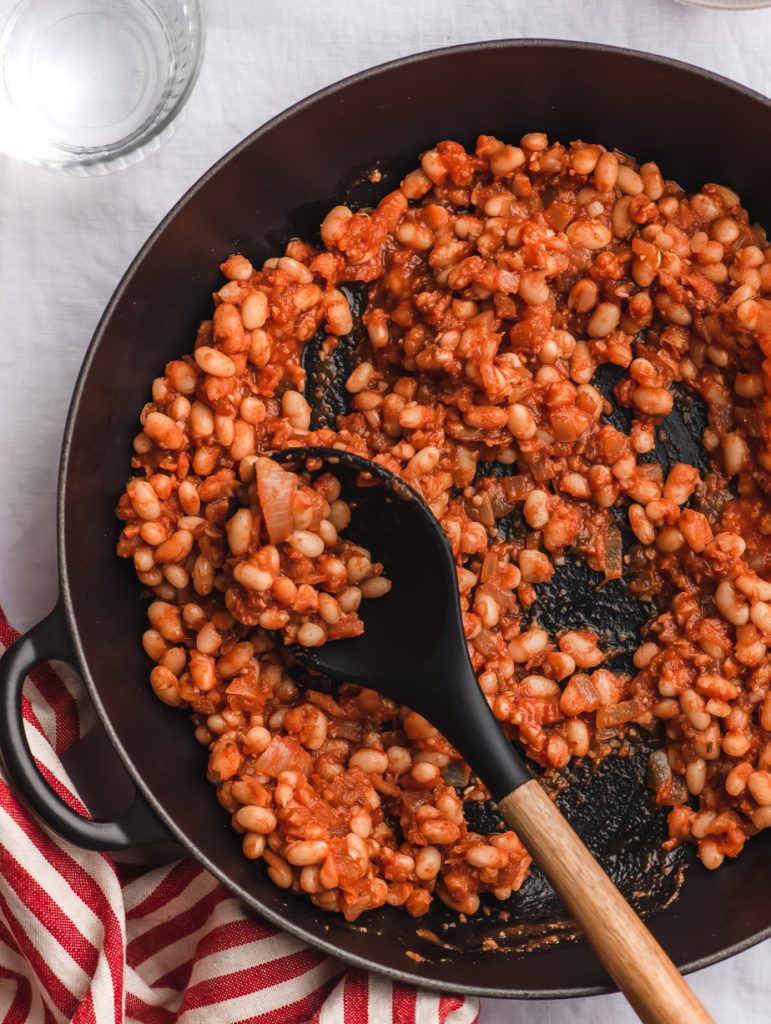 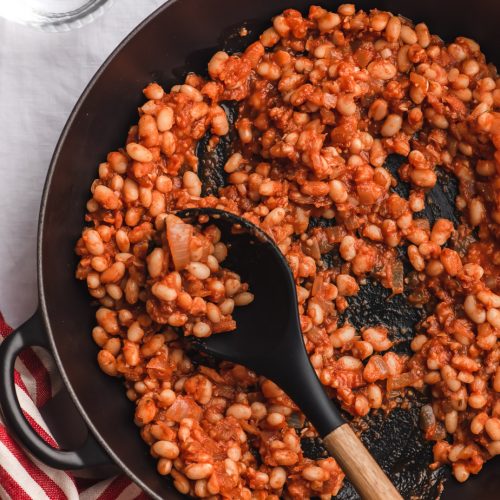 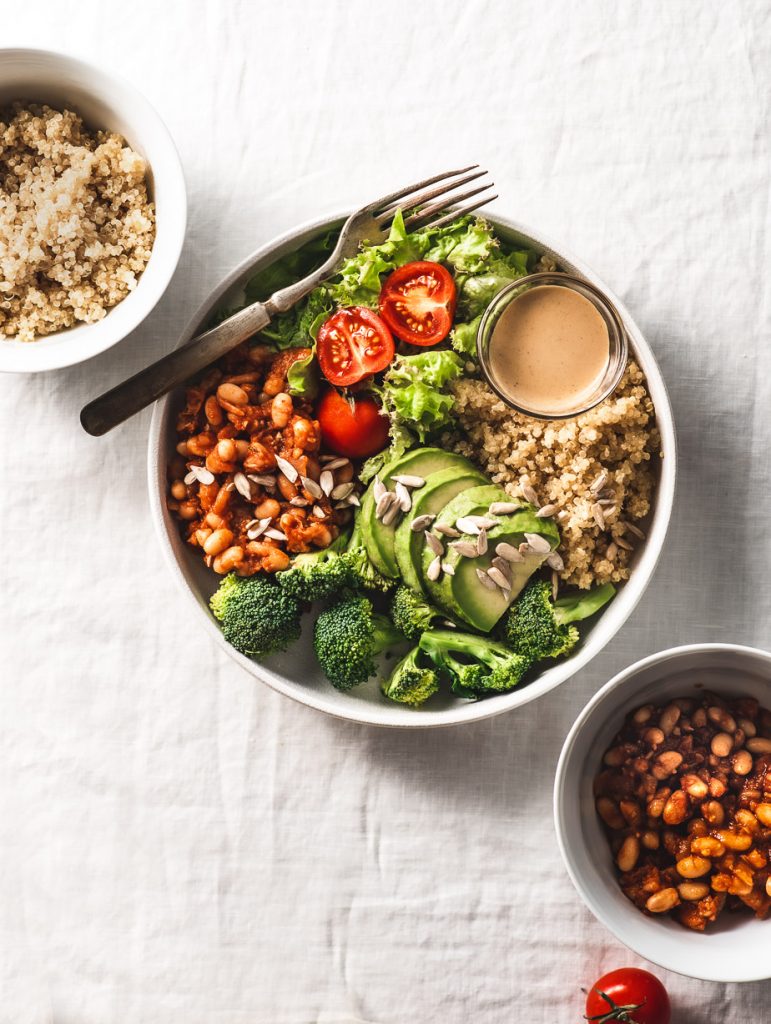