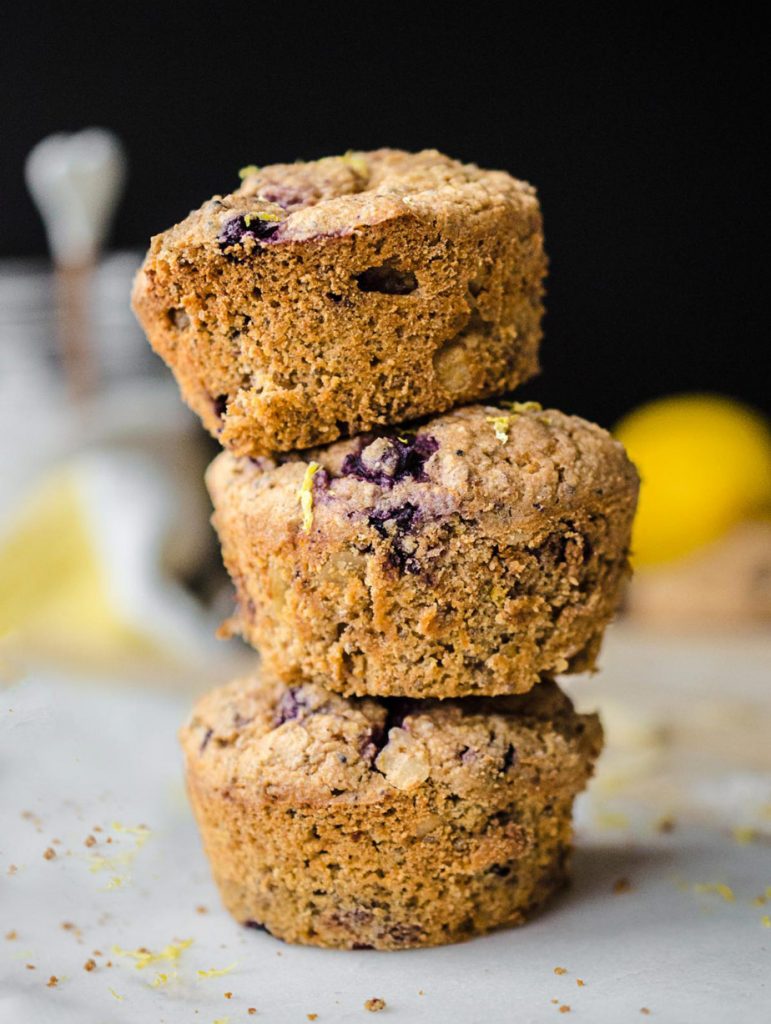 I had 13 lemons to be exact. More than I know what to do with, even though I love lemons and add a squeeze to just about everything!

I also use the weekend to get some baking done -muffins, breads, cakes – anything that I can pull out of the freezer during the week for a quick snack or breakfast.

So Sunday morning plus a whole lot of lemons gave me the idea to make lemon poppy seed muffins!

But no poppy seeds. Hm, what looks just like poppy seeds but are even better? Chia seeds!

This version you see here is delicious, light and lemony with an occasional crunch from chia and a fruity pop of colour from blueberries.

But this darling little muffin wasn’t my first batch! The first round of these lemon chia seeds muffins that I made were terrible!

I was a little absent minded and couldn’t remember how much almond milk I added…..turns out not enough!

The first batch was dry and dense and sucked! I mean I’ll eat them and drown them in almond butter and chia jam but I wouldn’t serve these to someone else! Except for Bernard, he’s a garbage disposal.

I couldn’t let it go. I had to do it all again and it took up my entire Sunday morning. But it was worth it.

I’ve used coconut palm sugar in these muffins because the maple flavour from my preferred sweetener (maple syrup) was too strong and didn’t complement the lemon and I added slivered almonds to give it a little extra texture.

I’ve learned, from what feels like a billion batches of muffins, that I am pretty unenthused by a plain muffin – one without a whole lot going on the inside.

For two reasons… first I think a muffin is like a blank canvas begging to be filled with yummy nutritional superfoods-nuts, seeds, berries! Second, it’s less boring this way. Each bite is a little party in your mouth.

If you’re looking for a nice snack muffin, this vegan gluten free Lemon Chia Seed Muffin is one you might want to try. 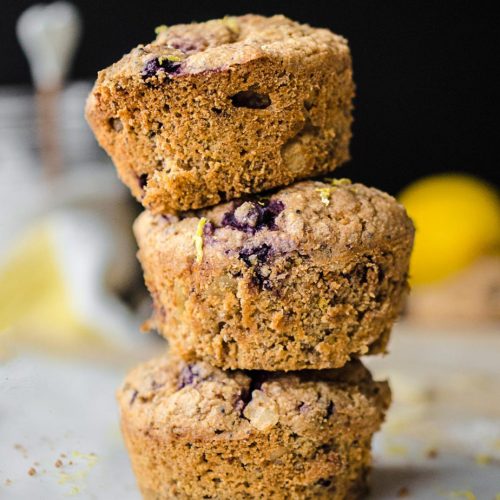 These muffins freeze well. If you won’t enjoy them within 3 days, I suggest freezing them once cooled. The sooner they are frozen, the fresher they’ll be when taken out of the freezer.
Did you make this recipe? Tag @riseshinecook on Instagram or hashtag it #riseshinecook